Visit Our Location Find A Location

Send us a Message info@davinciblanch.com

For Spas, Salons and Other
The DaVinci non-dental professional whitening process is a simple three step process. It is a combination of LED blue light, specifically designed for cosmetic laser teeth whitening, using our all natural laser whitening gel. This whitening process is designed to safely and gently remove years of staining from teeth. It is safe, effective, non-invasive, and affordable. Clients experience great results in as little as 20 to 60 minutes, with little to no sensitivity. Our cosmetic laser whitening system yields the best whitening results available in the market today. Getting started is easy because DaVinci offers everything you need.

If you are considering teeth whitening for your spa or business contact us today. Find out for yourself how safe and effective our products are. 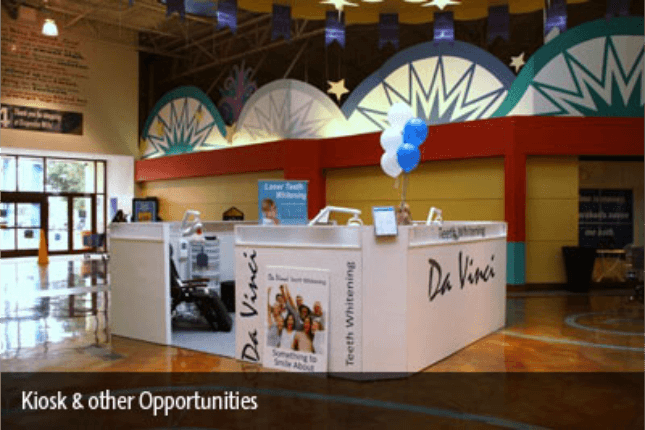 Background. Vital tooth bleaching for esthetic reasons has significantly gained in popularity during the last few years. However, few studies have investigated the efficacy of daytime or 1-hour bleaching products with use of a bleaching light as a catalyst.. For the purposes of the test, the Light was not part of the evaluation, only utilized as the standard by which the procedure is performed throughout various offices. The purpose of this double-blind in vivo study was to evaluate the efficacy of 44 percent carbamide peroxide, or CP, and 16 percent hydrogen peroxide, or CP, during daytime use, and less than 1-hour utilizing a standard LED light operating in the broad spectrum of 470-510 Nanometers. The degree of color change, any color relapse, and tooth or gingival sensitivity were evaluated.

Materials and Methods:Twenty-four patients volunteered to participate in this double-blind study, for which they received $100. The study protocol was reviewed and approved by the Institutional Review Board of Indiana University Purdue University Indianapolis. Patients received a dental screening and prophylaxis by a licensed hygienist or dentist at least two weeks before the study. All 24 subjects met the following criteria:

six maxillary anterior teeth present and free of any restorative material covering more than one-sixth of their labial surfaces;

six anterior teeth darker than B-54 and lighter than B-85 on the Trubyte Bioform Color Ordered Shade Guide (Dentsply Trubyte);

at least 18 years of age, willing to sign a consent form, able to return for periodic examinations, and willing to refrain from use of tobacco products during the study period.

Potential subjects were excluded on the basis of a medical condition that might interfere with the study results or require special attention;

a gingival index score greater than 1.0 or gross pathology in the mouth;

tetracycline-stained teeth or having undergone endodontic therapy in any of the maxillary anterior teeth;

use of professionally applied tooth whiteners within the past five years;

use of any kind of tobacco products during the past 30 days;

Abstract: Tooth whitening has become one of the most popular cosmetic treatments available. This article compares the efficacy of 4 in-office whitening system lights using a split-arch, randomized, parallel, blinded clinical evaluation study. Both in-office tooth whitening lights were effective and there was no significant statistical difference over the period of observation.

Twenty patients participated in the study. The bleaching gels were all 14 percent H2O2. The 4 lights that are being evaluated is the Brite XL3, the Crystal 1400, the IBrite, and the Zoom2. Patients mouths were divided into quadrants with the upper right quadrant using the Brite XL3, the lower right using the I-Brite, the upper left using the Aladdin Wireless Light, and the lower left using Beyond Dental Light. After the treatments were complete, all quadrants brightened equally on 90 percen of the patients studied.

Conclusion: There is no significant difference in the whitening power of the LED lights. All lights brightened equally well.

In 2006 and 2007, several articles were published that evaluated the efficacy of light-activated bleaching lights. One study reported positive results,3 whereas the other articles concluded the opposite.4,5 It is apparent that the dental profession needs more evidence to provide for better and more efficient treatment. The need for more knowledge becomes even more important as manufacturers inundate the dental profession with advertisements promoting light-activated tooth whitening as "state of the art" and propose that it is an integral component of the modern dental office.

The Journal of Contemporaty Dental Pratice

(p<0.05) better than the placebo or pooled positive controls evaluated in the clinical trials assessing tooth color or shade. Adverse events were similar in type to the other vital bleaching systems. Overall, the research of 408 patients showed generally better efficacy and similar to or better tolerability for the 14% hydrogen peroxide strips compared to a selected group of marketed positive bleaching controls.

Objective: This study evaluated the clinical response of a new, peroxide-containing paint-on gel relative to a marketed control having a similar pre-treatment peroxide concentration. Methods: 32 adults were randomized to Colgate® Simply WhiteTM, an 18% carbamide peroxide paint-on liquid in an applicator bottle, or Crest® Whitestrips®, a 6.0% hydrogen peroxide gel on a whitening strip. Participants were supplied with the manufacturers usage instructions specifying twice daily 30-minute treatment. Efficacy was measured objectively as L*a*b* color change using digital images of the maxillary anterior teeth after 1 & 2 weeks treatment. Results: All subjects made all visits, and were included in the analysis. Week 1 adjusted means and standard errors for Db* (yellowness) were –0.3 ± 0.12 for the paint-on group compared to –1.6 ± 0.12 for the strip group, while lightness/brightness (DL*) means were 0.3 ± 0.18 and 1.7 ± 0.18 in the paint-on and strip groups, respectively. Outcomes were consistent after 2 weeks, with 94% of strip users and 25% of paint-on users experiencing at least a 1-unit improvement in b*. All (100%) of strip users and 19% of paint-on users had at least a 1-unit improvement in lightness at Week 2. Between-group comparisons showed highly significant (p < 0.0001) greater color improvement for the strip group compared to the paint-on gel. For Db*, DL* and the composite measures DE* and DW*, one week use of whitening strips resulted in significant (p £ 0.0001) color improvement relative to that seen following two weeks use of the paint-on gel. Both treatments were well tolerated. Conclusion: One week use of 6.0% whitening strips resulted in superior whitening compared to two-weeks use of an 18% carbamide peroxide paint-on liquid. (This research was sponsored by The Procter & Gamble Co.)